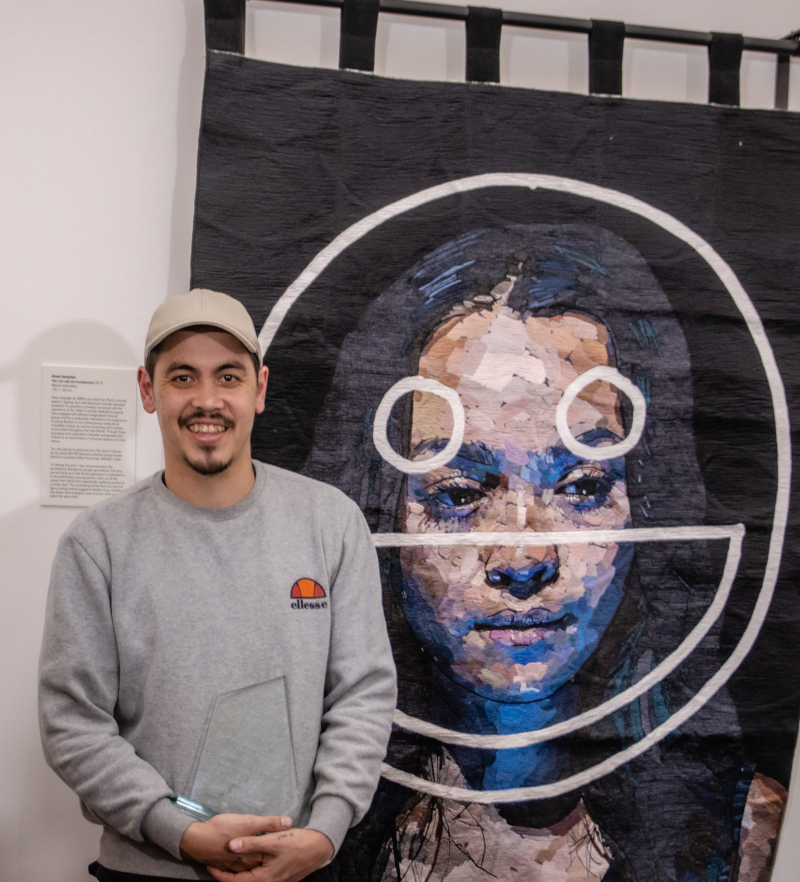 We sat down over 'Zoom' with Abdul Abdullah, who in 2019 became the inaugural Australian Muslim Artists Arts Prize recipient. Talking about his career as an artist, the prestigious Archibald Prize, receiving the AMA Art Prize and he dropped some wise words of advice for emerging artists.

NB: You're a multidisciplinary artist working with different mediums like embroidery, oil paints, installation and print. Why do you use these mediums?

AA: I started off just with painting. When I finished my undergraduate degree in 2008 at Curtin University in Perth, I was really steadfast that I was going to be a painter. I've been really fortunate that, as my practice has expanded, I've been able to work with a whole bunch of different mediums. I started working with photography in 2011 and that's been part of my practice ever since. More recently, I've gotten into sculpture and installation. I've also worked with performance and video a little bit. One of the privileges of being a fill-time artist is that, when I have an idea, I can now figure out what is the best way of communicating the idea as effectively as possible, whereas before, I'd just go, 'how do I paint this?'

NB: Can you tell me about an artwork of yours that was a turning point for you as an individual or in your career?

AA: Definitely the painting of Waleed Aly that's at the IMA. That was a big turning point for me, because up until that point, all I had made was pretty paintings and portraits of my friends. Then I painted Waleed, and I received a very bizarre, negative response from a certain section of Australian society who went out of their way to send me lots of very, very nasty emails and that sort of thing. It redefined my practice because it wasn't something that I was necessarily seeking out, but it was something that found me. Waleed had experienced all sorts of these nasty things like this even back then, and he said in an interview that we're going to be perceived in a particular way because of our names and the ways we look, regardless of the reality of our actions and beliefs. That stuck with me. I got quite cross with the public's reaction but I was going to challenge these negative things with my creative practice.

Professionally, the paintings of Waleed was the first time I participated in  a national conversation. After the Archibald, the work flowed into an exhibition called Them and Us at Melbourne's KINGS Artist-Run Initiative. That was the first show that I had a painting in, and it was my first politically motivated exhibition. From then, my practice shifted entirely. It became a lot more conceptually and politically rigorous than it was before.

NB: Your work focuses on the experience of the 'other'. Traditionally, the concept of the 'other' relies on a binary opposition of the dominant/other, us/them type of thing, which falls to recognize all the 'grey areas' or pluralisms that actually exist in between these binaries. As someone who has a tripartite background of being Muslim with Malay/Indonesian and convict/settler Australian heritage, what are the challenges you face with working in this typical binary space?

AA: I've never had it put to me like that; the idea of the grey spaces in between. That's really kind of where I exist. That binary is something I've always questioned, challenged and found quite uncomfortable, but it's a binary that I've lived with - and I think a lot of Muslim have lived with - especially post 9/11.

After September 11, there was a shift in what my Muslim identity represented. With my practice, I was initially focusing on the negative perceptions, almost like putting a mirror to some of the negative projections on people like me. Since then, my work has expanded and I've been less focused on the negative projection and instead have tried to make work that's an offering in service of people like me. I think about that 13 year old version of me who's in Bankstown or East Perth or Sunshine who's just coming to realize that their voice isn't being represented, or that they're not going to open a magazine the binary because it's been that us/them thing forever. My work is in service of that gap.

I'm not claiming anybody's experience because all experience are different, but I believe there's enough of a shared experience that hopefully they relate to it. If there's a sense of ownership of the space where these ideas exist, it makes those spaces their as much as anybody else - and there's value in that.

NB: I'd like to talk about your winning piece from the Australian Muslim Artists Arts Prize in 2019, You can call me troublesome. Your Call me by my name series features emoji-inspired characters superimposed on realistic, somber portraits of people. Emojis have become highly commercialized symbols of the West, despite their current upright-facing iteration having roots in 1980s Japan. I see this work as commenting on how the 'other' is often required to demonstrate their compatibility with the West to 'fit in'. What was your message behind this work?

AA: I really like that! Can I just take that? *Laughs*.

I came to work with emojis a little bit differently, and I guess not really in a Western context. When I was first working in Indonesia in my residency, I found myself in Jakarta surrounded by different languages. our primary mode of communication was a mix of emojis and broken hieroglyphics; like a visual language communicating very sincere things, but also being very of these particular emojis. Like the fact that the smiley face is the most common but it's used in different contexts in different ways.

I like the smiley face over this embroidery where it's hand-done and it's quite extreme; it's  a joyous smiley face, but it can be seen in a bunch of different ways. The circle encompassing the smiley face almost acts as a shield of what's been projected onto the subject or what they're projecting into the world. I creates a few clues to a bugger story that, as the audience, we get to unpack and then discover something for ourselves.

NB: The smiley face emoji is quite a universal icon, and in that way, it's like the audience can come to the work project their own experience onto the work.

AA: Definitely, I really love that. And that can work in two ways. It can go well, and mostly it does, but on occasion, it can go really awfully, like with my work that got censored at Artspace Mackay, where I depicted Australian soldiers in Afghanistan with the smiley faces over the top. It's a fine line that we have to walk.

NB: And so would you say that what happened at Artspace Mackay is the most memorable public reaction to your work?

AA: There's been an ongoing series of these reactions happening from both smaller and larger groups, but the situation at Artspace Mackay was probably the biggest one in that it was a federal political and it received coverage on Sky News and Channel 9. That's when it went really pear. In previous situations, my works weren't removed but there was really big backlash - like in a show that I had with brother in Western Australia in 2015. In this instance, the reaction was siloed in Perth. But with Artspace Mackay, it became something else because my work was mischaracterized and warped on television. There was a segment where someone from the RSL was interviewed, and although I can't remember the exact wording, it was to the effect of, 'here's an artist that's attacking Australian veterans. What do you think?' so the interviewee got really upset about it. That's the way it was presented.

NB: I know you had some upcoming projects both interstate and overseas, like at Cairns Art Gallery and the Gropius Bau Museum in Berlin, but these have been delayed due to the current state of the world. Do you have any plans for projects closer to home in the meatime?

AA: The Gropius Bau show went ahead but in a smaller iteration, and the Cairns show opened and is on until 22 August, so I should really update my website *laughs*. Upcoming, my brother and I are doing an exhibition in Perth in August at the commercial gallery that represents him, so it'll be more contemporary. I'm doing another show with my brother at the new Bowral regional gallery which is opening in May next year. I'm also exhibiting at the Malaysia. That one was supposed to be in September, but because of the COVID-19 situation there, it's been pushed back to - likely - 2022.

NB: Which direction would you like to see Islamic art and Australian Muslim artists headed towards in the future?

AA: I would say greater participation and visibility. I know from speaking to young people and going to visit Islamic high schools that there's challenges for young, prospective artists or people who want to pursue creative things. I don't want to speak out of turn, but I think there are some challenges from anyone with a migrant background and especially for their children to go pursue art at university. It's not feasible for everybody. I was very lucky that both of my brothers had done it before me so I didn't have any resistance from my family, but I've met a lot of young people who don't have that support at home or they feel like maybe their parents think it's a waste of time.

AA: I'd still encourage them, even if it's not professionally, to still continue creating art because it contributes positively to so many areas of a person's life. I went to a high school that had a special art program so we got to do extra art classes. The best artists in my class are all doctors and lawyers now, so they use that creative base to have abstract though in whatever profession they pursue. There's so many urgent and essential voices out there that don't necessarily get a platform, so it'd be awesome if people accepted art a little bit more - and increased visibility and participation would be great.

NB: And, just one last question: what's the best piece of advice you've been given as an artist?

AA: I'll give you two things. One is to be the audience more than you're an artist. Participate and go see show and absorb as much stuff as you can. Don't be siloed away. You want to see what's out there. Go to openings and be part of that community.

The second thing is kind of related, but it's to not go out there alone and instead find a community of like-minded people. They might not be from the same cultural or religious background or same generation, it's just finding people that are like-minded creatively and leaning on each other for opportunities, for skills, for these different things. It's so much better to do this with a group of people as opposed to doing it by yourself.